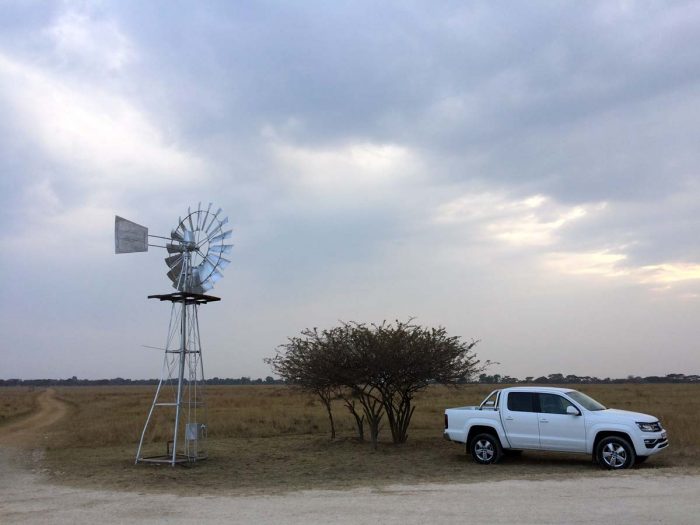 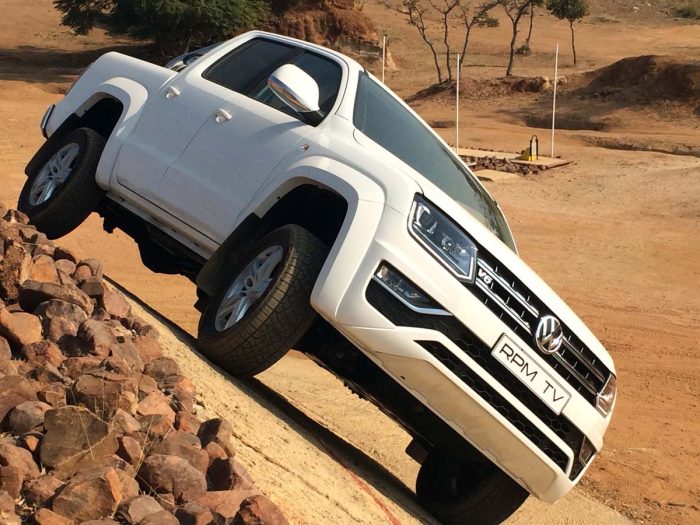 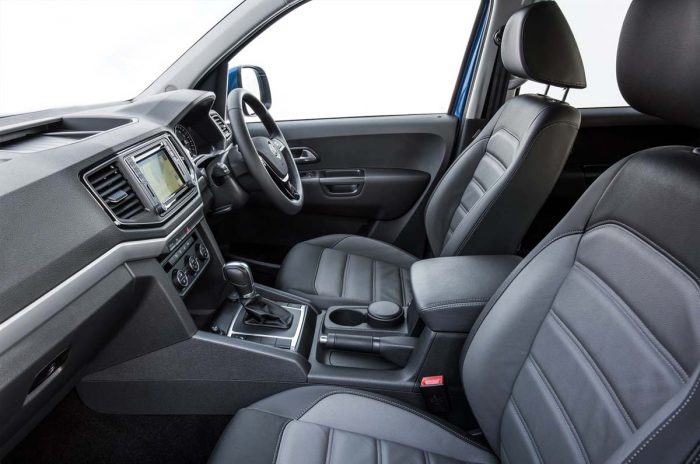 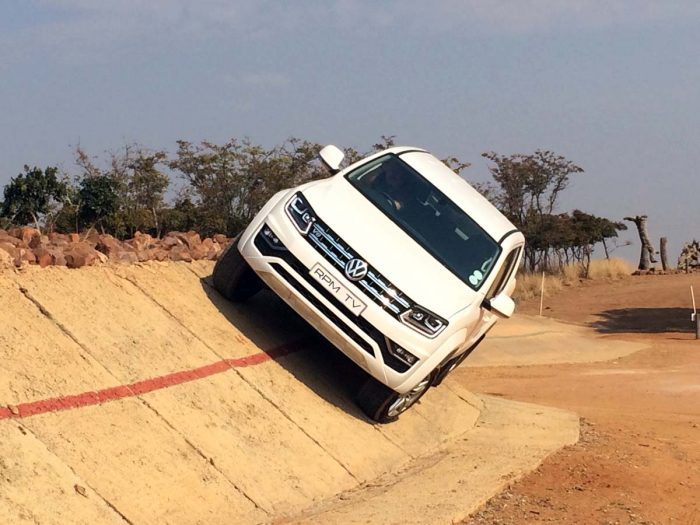 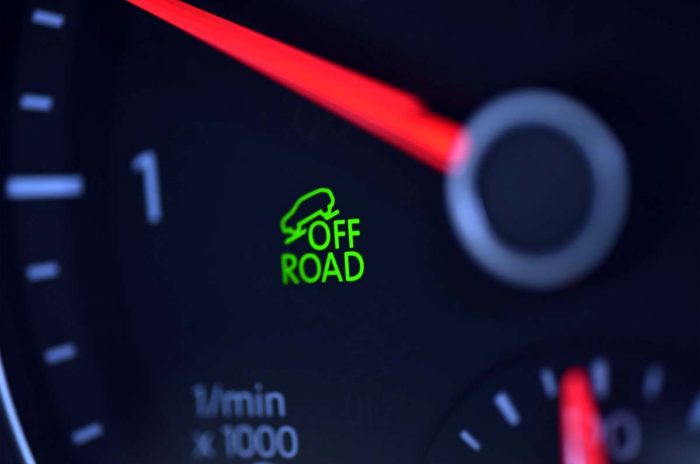 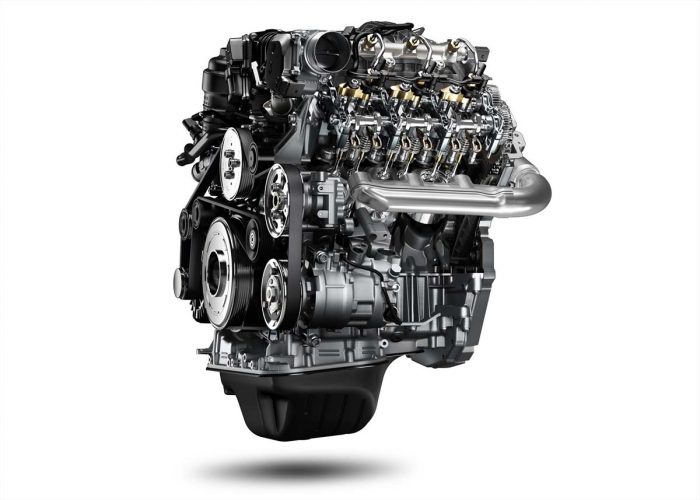 It’s a debate that’s been raging ever since Volkswagen took on the big boys in the 4×4 bakkie segment with its sleek, sophisticated, car-like Amarok: can the German-engineered, South American-built pick-up tackle its Japanese rivals when it comes to the really rough stuff?

The manual-transmission VW Amarok 4×4 models are offered with a low-range transfer case. But the auto gearbox versions – like the recently released 3.0 V6 TDI flagship – eschew low range for an array of high-tech solutions that include permanent all-wheel drive, electronic diff locks, and condition-specific stability programmes.

Until the arrival of the V6, the Amarok also relied on a small-capacity, efficient bi-turbodiesel engine for its top model, instead of the more popular, larger capacity mills used by its competitors – specifically, the hugely popular Ford Ranger 3.2 TDCI and the Isuzu KB.

The argument favouring bigger engines is that they offer a broader, more even spread of torque and are less prone to turbo lag – a malady that can delay the transfer of urge when you most need it in challenging off-road conditions, and can also negatively impact on the vehicle’s towing prowess.

Interestingly, the likes of Nissan and Mitsubishi have also moved to smaller-capacity, high-tech turbodiesels …

V6 POWERHOUSE
Before we get into the nitty gritty off-road side of the Amarok V6 TDI, here’s a quick run-down of the highlights. The 3,0-litre V6 TDI engine is good for 165 kW and 550 Nm, making it the most powerful standard-production double cab in its class.

Together with a slick eight-speed auto gearbox, full-time all-wheel drive (that varies power between the front and rear axles, as well as between wheels and the same axle), and ESP stability control, the Amarok V6 is a surprisingly rapid on-road tool.

It gets off the mark with huge enthusiasm, and the engine comes on song so quickly that you need operate the shift paddles with some alacrity to stay ahead of the rising revs. The shifts are quickly and crisply executed, but the box is also happy to be left to its own devices.

RAPID PERFORMANCE
In fact, the Amarok V6 is unashamedly sporty, racing from rest to 100 km/h in 8 seconds flat, and reaching a top speed of 193 km/h. The 3,0-litre TDI engine has huge grunt across the rev range, and the eight-speed gearbox swaps cogs with rapid-fire precision.

Add a luxurious cabin with all the bits and bobs (leather, seat heating, electric windows, touchscreen infotainment system, Bluetooth and even Apple CarPlay) and this flagship Amarok is a swift, comfortable cruiser and an agile commuter.

ALL-TERRAIN CAPABILITY
But what about off-road? I’ll admit to being among the doubting Thomases with regards to the auto-transmission Amarok’s prowess in the rough stuff.

VW’s argument that a full-time all-wheel drive system with Haldex centre coupling, a spread of eight gears and intelligent control systems will achieve levels of all-terrain performance rivalling those of a low range transfer case-equipped 4×4 bakkie have always seemed just a little glib.

Yes, the Amarok V6 effortlessly conquered a mild off-road track when RPM TV colleague Spike Ballantine drove it in the Free State directly after the new flagship’s launch a few months ago. But he felt the route never posed a stern enough challenge to really gauge the bakkie’s all-terrain talents.

PUTTING THE AMAROK TO THE TEST
We decided to find out just how good that aspect of the Amarok V6 TDI really is. André De Villiers (aka andré4×4) is a self-confessed Amarok fundi. He’s also an experienced 4×4 instructor, and he’s driven just about any and every 4×4 bakkie out there.

We joined André at Sandwani Lodge near Cullinan, where he’s built a tidy little 4×4 test track that includes steep inclines, side slopes, a wading pit, a pair of suspension articulation tracks, and various other obstacles. It’s been designed to show off what a 4×4 vehicle can – and can’t – do.

André knows the Amarok inside out (which is why he’s tasked with training VW’s sales force), so he’s a great guy to explain some of the bakkie’s electronic intricacies – and how they ensure that the Amarok is serious a 4×4 machine as any low range-equipped vehicle.

UNDER-THE-SKIN ENGINEERING
The key under-the-skin bits include the front and rear electronic diff locks (which are electro-magnetically actuated and engage almost instantaneously at speeds higher than conventional diff locks), and an off-road mode that uses a raft of sensors to configure the Amarok’s auto gearbox, throttle response, all-wheel drive system and stability control system for optimum all-terrain capability.

Smoke and mirrors? At the Sandwani 4×4 track, the Amarok V6 effortlessly coped with everything I threw at it.

Suspension articulation? Even without the diff lock, but running in off-road mode, the VW made short work of the cross-axle exercise, lifting wheels high into the air without losing forward momentum.

If anything, the biggest challenge was modulating throttle input to limit power transfer – the V6 is a very willing mill! Engaging diff lock made the process even more seamless.

EFFORTLESS CLIMBER
Moving on to the inclines, the Amarok V6 TDI made short work of the 20 and 25 deg gradients, and cruised up the 30 deg without breaking a sweat. It even reversed up the 30 deg incline.

For me, the 41 deg incline was daunting, to say the least – it feels almost vertical from behind the wheel. But the Amarok nonchalantly chugged up to the steepest point, and was even happy to stop, then start again from that static position. Descending the gradients was equally undramatic – and the hill descent control kicked in automatically.

Admittedly, we didn’t conduct a real-world 4×4 tests in, for instance, sand or mud. But judging from our experience on the test track, the Amarok can certainly do anything a low range-equipped 4×4 bakkie can – and then some.

LAUNCH CONTROL
Here’s one example: the Amarok features launch control. It’s not meant to help you outdrag the Ranger next to you, but to allow for a quick, seamless pull-off when you need as much momentum as quickly as possible – for instance, when accelerating out of a trough in the dunes.

Off-road ABS, trailer stabilisation and the very quick, seamless gear changes are additional examples of how tech has been implemented to optimise off-road performance beyond the usual, 4×4 bakkie norm.

Of course, all these systems will be of little use if you don’t know how to use them. Indeed, the expertise of the driver remains every bit as important as the capability of the vehicle when venturing into off-road terrain. Time spent with an instructor well versed in the specific features of your 4×4 vehicle choice should be a must for anyone intent on taking their off-roader.

BETTER THAN READING THE MANUAL
That’s particularly true of the Amarok, which adopts a somewhat different approach to conventional four-by-fours. Getting somebody like André to show you the ropes before you head off to the dunes or the Richtersveld will ensure you don’t have to frantically page through the manual when you do get stuck …

You could call the Volkswagen Amarok 3.0 V6 TDI a new-age double cab. It’s more leisure vehicle than 4×4 workhorse, and its sophistication is likely to intimidate traditionalists. But it is a lot more proficient in real 4×4 conditions than most people give it credit for – and more so than some of its rivals in some respects.

And if the V6 TDI flagship’s hefty asking price puts it out of reach, then the more affordable, but no less sophisticated 2,0-litre BiTDI is every bit as proficient off the road, but not quite as rapid.

* For more info about André De Villiers and his 4×4 training courses, contact him at andre@andre4x4.co.za or visit his website at www.andre4x4.co.za. 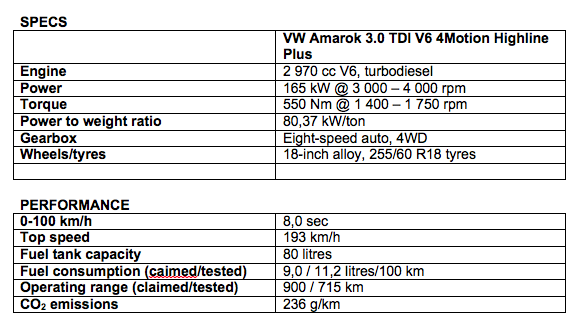 The Future of Opel in South Africa

AMG-powered Aston Martin could be pick of the DB11 duo 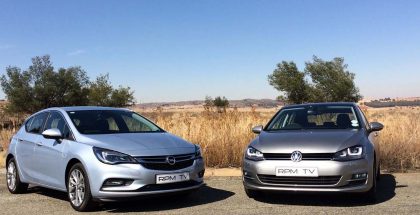 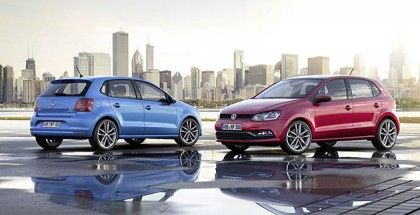 The Volkswagen Golf remains the compact hatchback benchmark, but the company isn’t resting on its laurels. The current Golf 7 has just received an upgrade offering enhanced aesthetics, smarter interiors and some drivetrain changes. We test-drive the latest VW Golf … END_OF_DOCUMENT_TOKEN_TO_BE_REPLACED